We were approached by one of our suppliers in Tanzania, Lemala Camps and Lodges, with an interesting project.  Not only would the project benefit school children in the Tarangire area, but it would remove single-use plastic from nearby national parks – a positive double whammy!

Alongside his passionate conservation beliefs, Chief Lobulo is a strong supporter of education for the children in his area. Overcoming many obstacles and together with the support of Lemala, he’s built a school, raised funds to pay school teachers, provide education materials and clean water for the children. Now he’s embarked on his second project, a kindergarten for the younger children.

Lemala pledged to find funding for 45 desk sets for his new school.  Each set comprises a desk and two chairs made from the recycled plastic of discarded water bottles collected from wildlife reserves.  Together with our supporters, The Tribes Foundation has provided funding for 27 desk sets. The funding paid for collection and delivery of the plastic bottles to Arusha and the manufacture of the desks and chairs.

Each desk set uses 15kg of plastic.  To put that in perspective that’s around 375-400 1.5 litre plastic water bottles and that’s 15kg of plastic that would have ended up in landfill.

It’s amazing to think that this humble recycling idea has turned single-use, discarded plastic into a product with an important purpose. The younger children from the surrounding communities now have a chance at education, a place to learn and somewhere to sit as they study. Education gives them the best chance for a solid start in life and a chance to succeed.

This is yet another example of where travel can be a force for good. It’s only with the generous support of our travellers that we are in a position to fund such wonderful projects. 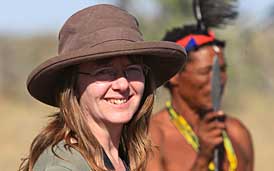 The charity was set up in 2003 by Amanda & Guy Marks who run the Fair Trade Travel™ company, Tribes. Founded on award-winning sustainable tourism ethics, the company is a leader in its field.
In 2012 they were joined by Karen Coe who is a director of the successful ‘Travel Photographer of the Year’.

The Tribes Foundation is a UK charity whose principle aim is to relieve the poverty of indigenous communities in areas outside of the UK which are affected by tourism. The charity backs poverty alleviation, education, cultural preservation and conservation projects within these regions.